As someone who now finds the need to vent their enthusiasm for music through a blog on top of the trawling through Youtube playlists, the buying of music in numerous forms, going to live gigs, DJ sets, reading interviews with artists, boring anyone who'll listen to me by taking about such musical topics as the demise of the flute in popular music and buying into all that paraphernalia that go along with following a band; T-shirts, tote bags and I even own fax papers from 1983 sent between a venue in Amsterdam and the manager of the legendary musician Fela Kuti which list things as mundane as Fela wanting 15 litres of coca-cola, 6 garbage cans and for the venue to be heated at 20 degrees for his arrival. As that guy, it might be surprising to know that I have only been interested in music since my late teens and early twenties. This is usually the time when people's musical tastes "mature", as horrible as that phrase is, but for me, there was nothing to mature. I was late to the party and the world of music opened to me as others were beginning to send their guilty pleasures from their CD collections to the charity shop. Somehow I'd avoided all the pop that my friends were raving about and all those classic songs by the likes of ABBA, Wham!, Michael Jackson and beyond. I just wasn't interested.

I think my first true interest in popular music came through seeing the video for Bohemian Rhapsody by Queen for the first time on Youtube. Rather than Queen, it was Youtube that I was checking out amid warnings from school that the new video website might be a dangerous site full of unsuitable content and viruses. I somehow ended up watching the Queen video and I was immediately drawn in by its theatricality and just how bonkers both the video and song are, not to mention the hair. They hooked me in and I moved out from there, discovering more classic songs for the first time.

The reason I'm waxing so lyrically about my "discovery" of music is because I'm interested in the way that people do those first steps and their continued forays into music. Most start off like me, although perhaps a little earlier and with more help from their parents. They get to learn the classics of Motown, pop, rock, rock 'n roll etc. You then listen to your friends, the radio and whatever else is happening around you and find that stuff that sounds a bit like your favourite tune from the '60s, '70s, '80s or whatever, is coming out now, sounding a little different perhaps but happening now. That's exciting. You can be the one who goes out and queues for the album on release day, you can actually see the band live in some sweaty, dank club, you can create the stories your Mum tells you about when she saw Rod Stewart live in the '70s, but about your band.

This band for me was The Horrors and I did all of those things; getting their album Skying (still probably my favourite album) on the day of its release and going to see them live as my first gig (definitely my favourite gig). From there you discover the band's influences, how they take from a host of psychedelic bands from the '60s and '70s; The 13th Floor Elevators, early Pink Floyd, The Velvet Underground.

Then something comes along from an unlikely place which makes you start all over again. For me, this unlikely source was Mr Elijah Wood or as I know him, Frodo Baggins. Elijah Wood changed my life enough through The Lord of the Rings trilogy, but it's this video that opened the next door in my musical journey:

It's a video of Elijah Wood at the American record store, Amoeba, chatting about the records he's bought on his visit. Among them he picks out the eponymous debut album by Gal Costa from 1969. He describes her as "super psychedelic" and as a part of the "Tropicalia Movement in Brazil". My interest in psychedelic rock, that started with The Horrors had grown into an obsession with the genre so I just had to check out the "super psychedelic" Gal Costa, and the Tropicalia Movement sounded pretty cool too. I discovered Gal's incredible debut album and discography and the Tropicalia Movement of the late '60s and '70s in Brasil - a group of musicians who made psychedelic music as a resistance to the oppressive government regime. This lead me to more bands and musicians from the movement; Gilberto Gil, Os Mutantes, Secos & Molhados. I realised that up until then, my musical tastes were white men from Britain and America, often wearing paisley shirts or denim jackets. My musical discovery started again, and I discovered the big names in Brazilian music like I had in pop and rock and Motown, before delving into the more obscure gems. Through the music of artists like Lula Cortes, Arthur Verocai, Jorge Ben and Baden Powell I learnt not just about the music of Brazil, but also about Brazil itself; its people, history and its culture, all of which I had previously no knowledge nor interest in.

This lead me to want to hear more, discover what else could excite me and what I could learn from. In my musical travels I've been to Turkey through the music of Erkin Koray, Ajda Pekkan, Ersen and Baris Manco. To Italy with Ennio Morricone, Piero Umiliani and Nico Fidenco. To France with Serge Gainsbourg, Alain Goraguer, France Gal, Jean-Pierre Massiera and Brigitte Bardot and all aboard Youtube, Soundcloud and Spotify airlines.

That's what music does best. It takes you places you may never have even thought about before. It makes you interested in all sorts of times in history, countries, communities and cultures. More so than any other, my fascination with Nigeria was first sparked by its music. Introduced, as so many are by the music of Fela Kuti, I discovered Nigeria's other genres and artists and I have since got quite a large collection of original LPs from Nigeria, mainly from the 1970s. The music has lead me to go to gigs of Nigerian and other West African music, attend exhibitions on Nigerian art and to read books or go to talks on its history and its future. 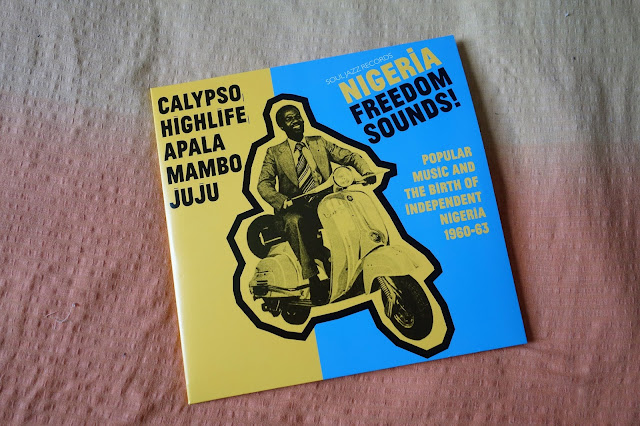 So imagine my joy when one of my favourite labels, Soul Jazz Records, announce the release of a compilation of popular music from post independence Nigeria. I popped down to the excellent Sounds of the Universe store in Soho, London, which is linked with Soul Jazz, and bought it on release day.

Nigeria Freedom Sounds! collects together 24 songs across two LPs, documenting popular music between 1960, the year Nigeria gained independence from Britain, and 1963. It's the kind of music that you can imagine a packed dance hall in Lagos dancing to - a mix of jazz type horns, Afro-Cuban style dance tunes and sunny guitar. It's music to make you shake your shoulders to and it all has a distinctive Nigerian and African feeling from infectious, rattling percussion. 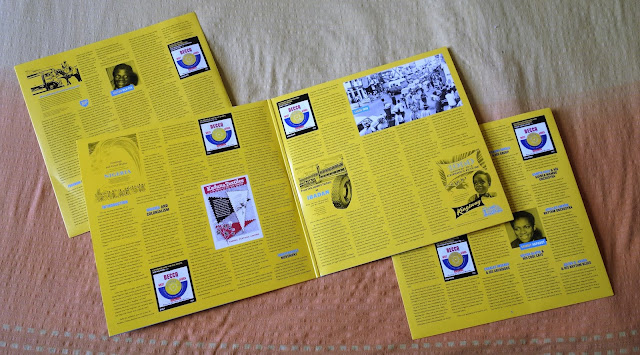 The compilation covers a variety of artists and styles and is great at painting a picture of Nigeria at the time. The gatefold album sleeve and the two inner sleeves come covered in extensive notes detailing the history of colonialism in Nigeria, Independence and a little on post independence Nigeria. There is also a section dedicated to the evolution of music in Nigeria; from the initial first recordings in the 1920s to an explanation of the different styles in the compilation, which I was thankful for as apart from Highlife, I wasn't really sure of the characteristics of each genre. There's also details on each artist and their songs. It really is the full package and leaves very few questions due to its thorough explanation of the period. There are also some fantastic pictures of adverts from the time, which are both incredibly beautiful and often fun artistically, yet these optimistic and celebratory images are tinged with sadness at the knowledge of the horrific Biafran war to come and of Boko Haram currently terrorising the people of Nigeria. Below's a track from the compilation by Chris Ajilo and his Cubanos, one of the only tracks from the compilation on Youtube:


Compilations, when done well, are the perfect way into the history and culture of a country and Nigeria Freedom Sounds! is a perfect starting place to become enthusiastic and informed by this fascinating nation and its people.

Compilation
Nigeria Freedom Sounds!
Soul Jazz Records
Double Vinyl LP out: NOW! at Sounds of the Universe
Posted by The Irregular Riff at 13:23

Promote your Page too

What is The Irregular Riff?

Music blogs tend to be by guys or gals who really know their stuff about their specific favourite music. There's blogs about all sorts; blogs on rare Bowie singles, about Berlin punk from 1981, about rare psychedelic albums from 1968-9. Those are great, but only when you know what it is you're looking for.
Let The Irregular Riff be your place to discover new, old, lost and celebrated musical gems. Not limited to any genre, The Irregular Riff tries to write interesting articles about musical history and influence among random musings and ramblings.
But it's all about the music. Thus far The Irregular Riff has introduced readers to upcoming releases as varied as Brazilian classics, psych-pop dance floor fillers, techno thumpers and funky Nigerian hidden gems.
The only rules are that the music is going to be released in a physical format in the coming weeks or months. This means they can be the latest albums from the newest artists or reissues of classics or records previously thought lost. Other than that the genre and style of music can be anything, as long as it's great.
So swing by The Irregular Riff to see what's going on and you never know, you may find yourself becoming a fan of Colombian salsa or Emo rock for the first time, or you might get to read about your favourite band's latest release. The Irregular Riff aims to post new blog posts every Monday and Friday, although posts might turn out to be as irregular as the blog's name.
Be sure to give the Facebook page a Like to keep up with the latest posts and more musical musings and check out the blog for the beginning of your latest musical discovery.

- Hey dude. - Oh hey, thanks for checking out the blog, needs all the help it can get these days. - Ye sure. You know that the single ... 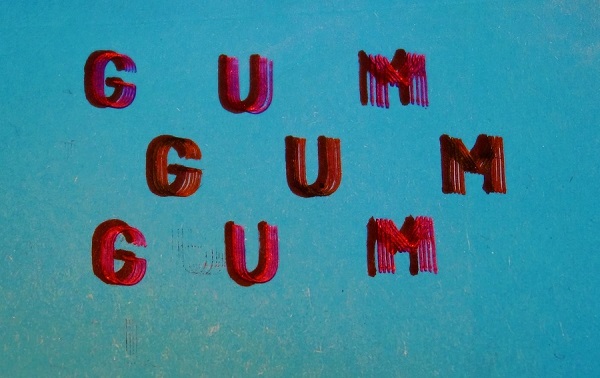